The lead in the February 2012 issue of MONOCLE was about charm and this quote fits PLAYMOBIL® perfectly.

“Taking a punt on a quality [charm] that can’t be measured in facts and figures is deemed the ultimate risk. And yet charm is arguably the most important factor for securing repeat business, which in today’s financial climate is invaluable.”

PLAYMOBIL® oozes charm and their customer support and product quality is unsurpassed.

► Horst Brandstätter My Last Meal: The octogenarian head of Playmobil shares lunch at the staff canteen of the company he runs and loves (DECEMBER / JANUARY 2013/14 issue of Monocle)

► Some of my photographs were featured on the PCC site! 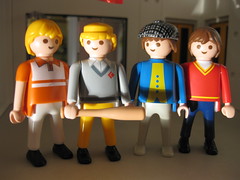 Playmobil: The Story of a Smile by Felcitas Bachmann
Playmobil Collector 1974-2006 by Axel Hennel
Toy Design by Van Chris Uffelen