You are just a cog in the wheel. You are just a sack of flesh and bones in service to the elites (Yellen, Garland, Fauci, Obama/Biden/Romney/Clinton/Bush, Wray, etc.) and your blood, sweat, toil, and tears must feed the Leviathan.

“Biden is not the puppetmaster, he’s the puppet. Whether it is Susan Rice or Barack Obama, or even Ms. Jill Biden, we don’t know. Whether it is the permanent Deep State apparatuses, or George Soros, or Dr. Anthony Fauci, or Bill Gates — we’re not sure. If it is China making the final call, (which should make Taiwan very nervous), it is unclear but possible. It would not be hard to argue that the globalists in the New World Order are making the final call. But who or whomever it is, it doesn’t seem to be the present resident of 1600 Pennsylvania Avenue. He is incapable.”

As America circles the drain Biden/Harris partner with the CIA, DOJ, FBI, CIA, CDC, and DHS to silence the real enemy.

“Republicans in general, and RINOs in particular, need to wake up and realize that the Steele dossier, Crossfire Hurricane, and two impeachments were not about Trump. None of this was done because The Donald sends mean tweets. These attacks were done because he had denied them their “rightful victory.” He dashed their dream to become our unchallenged rulers.”

(1) Intelligence Has ‘Six Ways From Sunday Of Getting Back At You’ (thefederalist.com) (The Federalist)

(1a) Schumer Warns Trump: Intel Community Has Many Ways to ‘Get Back at You’ (YouTube)

Last week, Jen Van Laar at our sister site RedState broke the news that a high-ranking defector had been working for months with the U.S. Defense Intelligence Agency (DIA), unbeknownst to either the FBI or CIA. 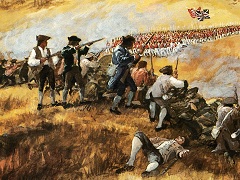 “The C.I.A.’s growth was ‘likened to a malignancy’ which the ‘very high official was not sure even the White House could control…any longer.’ ‘If the United States ever experiences [a coup to overthrow the government] it will come from the C.I.A. and not the Pentagon.’ The agency ‘represents a tremendous power and total unaccountability to anyone.'”
– Arthur Krock, New York Times, October 3, 1963

The difference between 1963 and 2021 is that our institutions have been thoroughly infiltrated by Marxists.

How do I know? The quote was in the New York Times in 1963 and today they have jettisoned journalism for “fortifying” the agenda of our elites via deception (lies and propaganda). “Political language is designed to make lies sound truthful and murder respectable, and to give an appearance of solidity to pure wind.” – George Orwell

(1) The Reckoning of the FBI Has Begun

(4) Orwell On Trial: Was George Orwell an informer? The London intelligentsia is reeling from disclosures that the author of 1984 and Animal Farm gave a list of Communist sympathizers to a shadowy branch of the British government in 1949. (Vanity Fair)

(5) A quote from Walt Disney: The Triumph of the American Imagination by Neal Gabler:

“Walt’s belief that the SCG was Communist-inspired was undoubtedly sincere. It also may not have been entirely wrong. Arthur Babbitt certainly wasn’t a Communist, nor were any of the other animators, but Dave Hilberman, the assistant who had begun organizing the studio, had by his own admission been a member of the Communist Party and had even traveled to Russia when he was a young man. Moreover, an FBI report called William Pomerance, soon to be the union’s business manager, ‘one of the leading Communists in the movie industry’ and claimed that at least since July 1941, a month after the strike began, the union had followed the Communist Party line. Citing an internal source close to the labor situation, the report concluded that the Disney strike proved ‘conclusively’ that the SCG was Communist-dominated and said that the Communists ‘threw the entire strength of the Communist machine in Hollywood’ into the dispute.”

The still is from Our Friend the Atom.

I’ve written this before but I’m infinitely more happy NOT writing about (or following) politics. On the other hand, I’ve been roused by the gross proliferation of trough-eaters oozing and matriculating from every layer of our spent culture.

On second thought, I’m going back to sleep now. Please wake me when there’s a candidate and party that believes in (1) private property, (2) free markets, (3) the profit and loss system, and (4) limited government.

“One of the major themes of this primary season has been Republican voters angry at their own party in Congress, anger that is both more jarring and more unforgiving in a party whose top-to-bottom strength in Congress and state capitols is the best it has been since the 1920s. At the core of that anger is a sense that the Capitol Hill GOP never seems to get around to doing the things it promises the grassroots even with significant majorities in both Houses of Congress. Meanwhile, voters see Republicans on the Hill trying time and again to cut deals with Democrats to serve the interests of the donor and lobbyist classes, like saving the Export-Import Bank or repealing the medical-device tax. Why, voters want to know, does Obama keep winning? Why don’t the people we elected deliver what they promised, or at least leave some blood on the floor trying?”

(2) Donald Trump Is Shocking, Vulgar and Right: And, my dear fellow Republicans, he’s all your fault. (Politico)

“Trump is in part a reaction to the intellectual corruption of the Republican Party. That ought to be obvious to his critics, yet somehow it isn’t…If you live in an affluent ZIP code, it’s hard to see a downside to mass low-wage immigration. Your kids don’t go to public school. You don’t take the bus or use the emergency room for health care. No immigrant is competing for your job. (The day Hondurans start getting hired as green energy lobbyists is the day my neighbors become nativists.) Plus, you get cheap servants, and get to feel welcoming and virtuous while paying them less per hour than your kids make at a summer job on Nantucket. It’s all good.”