There are 18 railway stations served by the National Rail network in central London. My goal is to explore and photograph each. Here’s a quick list / summary to date of those I’ve visited (and travelled to/from). My favorite station in the LSG is Euston whilst my favorite destination station (not terminal) is Harlow Town. Harlow Town (1959) was featured in British Rail Architecture 1948-97 (pgs. 76-81) by David Lawrence and was described in Architectural Review as the “first and most convincing fulfilment of the promise of better railway architecture in Britain.”

Related
(1) The Central line to Harlow? It could happen… (Secret London) 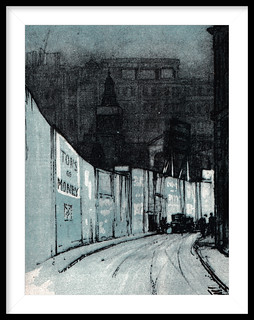 “Longer and darker the day, shorter and colder the night. Still and stifling the air: but a wind is stored up in the East. The starved crow sits in the field, attentive; and in the wood the owl rehearses the hollow note of death.”

“What day is the day that we know that we hope for or fear for? Every day is the day we should fear from or hope from. One moment weighs like another. Only in retrospection, selection. We say, that was the day. The critical moment that is always now, and here. Even now, in sordid particulars the eternal design may appear.”

(2) My Flickr album of the Midland Hotel in Morecambe. It was built in the 30s and reminds me of the Bird Terminal / TWA Hotel at JFK. I’m still working on a post about the architect and artists involved in its construction.

(2a) These are beautiful photos of the hotel from Flickr member robmcrorie.

(2b) A quote from The Midland Hotel: Morecambe’s White Hope by Barry Guise and Pam Brook:

“As well as allowing him [Oliver Hill] to design a substantial building in the new style he had embraced with enthusiasm, the Midland Hotel gave Hill the opportunity to put into practice his vision of unity in architecture and decoration. It was his belief that a building’s external appearance should be intimately linked to its internal décor, furniture, and upholstery – a philosophy he likened to ‘the French ensemblier system of architect, sculptor, decorative painter and other craftsmen…collaborating to one end and ideal’. It was this holistic concept that Hill brought to the Midland Hotel, one that would see him take complete control of all aspects of the project, from the building’s exterior design to its colour scheme, works of art, decoration, and furnishings – even down to the waitresses’ outfits, the colour of the hand towels and the shape of the door handles!”

(2c) A quote on Oliver Hill by Ken Powell:

“Alongside the revolutionary dynamics of the Thirties, an older tradition of craftsmanship persisted. Oliver Hill was, almost uniquely, able to bridge the divide between modernism and tradition. His work, hedonistic and even self-indulgent, may lack the purity and progressive zeal – and the breadth of imagination – of a Lubetkin or a Mendelssohn, yet Hill was a key populariser of modern architecture, selling it to clients who were not interested in social revolution.”

(5) National Rail Advertisement: Let’s get back on track (You Tube) 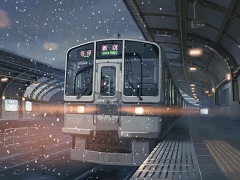 (2) Game Over: How technology forced traditional toys to evolve (Vera)

(4) A couple of quotes from British Rail Architecture 1948-97 by David Lawrence:

“Any designed object or space will have an appearance intended to attract the eye in some way: perhaps to impress or reassure, to demonstrate efficiency, or comfort, or progressive ideas.”

“Frank Pick (1878-1941), influential patron of art and design for modern transport, saw the potential for the railway station as an opportunity for architecture and design to come together in interesting an appropriate ways, and he knew that the station could earn money for the railway.”

“Only the concrete and brick stations built by the Southern Railway for routes converted to electric services during the 1930s provided a contrast to the varying levels of decrepitude manifested at the Region’s wayside halts and gloomy suburban stations.”

“Leslie (later Sir Leslie) Martin and his wife Sadie Speight, shared a background in architecture and avant-garde art. They were close to sources of modernity, not least because Martin co-edited the magazine Circle: International Survey of Constructive Art with artists Ben Nicholson and Naum Gabo, published from 1937. Sadie Speight was a founding partner of Design Research Unit, which would author the British Rail corporate identity of 1964. Together they designed a timber-frame school at Hartford Ch (1938), which used standard components to test building with ready-made structures. London, Midland and Scottish Railway (LMS) architect WH Hamlyn created a Development Section concerned with the collection of data from existing buildings, to look at types of station, planning and production of buildings, types of structure and their performance, wear and maintenance of materials and finishes, lighting and plumbing, and furnishings. From this data specifications would be compiled to standardize design, materials and equipment for future architectural needs.”

(5) It Was Supposed to Be the Safest Building in the World. Then It Cracked.

How San Francisco’s Salesforce Transit Center went from the Grand Central of the West to a $2.2 billion construction debacle. (Popular Mechanics)

“Driven out of paradise by You and exiled in a distant land, I cannot return by myself unless You, O Lord, come to meet me in my wandering. My return is based on hope in Your mercy during all of my earthly life. My only hope, the only source of confidence, and only solid promise is Your mercy.”
— St. Augustine

Posting has been light. I’m reading Absolutely On Music by Haruki Murakami and playing KH3. I also started the year with two wicked colds. There’s a ton in the hopper¹ though (and something very significant in the works). I’m a BIG believer in having things to look forward to and the KINGDOM HEARTS Orchestra this summer fits the playbill. There’s also the new TWA Hotel, a trip to the UK, and something Disney related (a real theme in 2019).

The Sound Tigers are still playing some solid hockey and the game against Charlotte could include Ladd and Hickey in the lineup (which probably means Dal Colle and Toews are staying with the BIG club).

Update 1: Ladd and Hickey were in the lineup against the Hartford Wolf Pack last night. They each had goals.

Update 2: The game against the Charlotte Checkers on Sunday @ 3:00 PM was incredible. The pace was blistering after the 1st.

Congrats to Josh Ho-Sang on being named @CCMHockey / #AHL Player of the Week with a natural hat trick, 4 goals total, and 2 assists in just 2 games! 🎉

¹What a great word. It harkens back to the railroad.

(1) A cool link between Nolan Bushnell and Retta Scott. The quote is from They Drew As They Pleased: The Hidden Art of Disney’s Musical Years (The 1940s – Part One) by Didier Ghez:

“From early 1983 to February 1984, Retta got to animate, develop character designs, and paint backgrounds (along with Mary Blair’s husband Lee) for a project that excited her more than working on commercials.  The project was a half-hour animated Christmas special called The Christmas That Almost Wasn’t. Nolan Bushnell, the founder of Atari, who at the time owned Pizza Time Theater, had decided to use his company to produce the special.

(2) Watch The Real Mary Poppins (2014) on Hulu. I had NO idea one of her (P. L. Travers) early mentors was George William Russell (Æ).  I have an original copy of The Interpreters (1922) on my bookshelf. It was acquired during my dystopian binge-reading and probably first made known to me in The Future As Nightmare by Mark R. Hillegas (also on my bookshelf). Here’s Hillegas on The Interpreters:

“While the anti-utopian tradition was establishing itself during the early decades of this century, other works than those we have so far discussed were being written with a more or less strong infusion of anti-utopian values…The excellent but little-known The Interpreters, for example, tells of a night of revolt against a Wellsian scientific state, during which five imprisoned intellectuals discuss the philosophical and ethical justification for the rebellion.”

(3) A quote from the Art of Atari® by Tim Lapetino:

“Design was at the root of Atari’s success, even from its earliest days. What began as a scrappy Silicon Valley startup with Nolan Bushnell and Ted Dabney at the helm grew to pioneer the new industry of video games…This ethos came through from the earliest days of Atari, and Bushnell explained that their approach was necessarily [emphasis mine] rooted in creative thinking and design as a competitive advantage.”

Those delicate children,
Thy dreams, still endure:
All pure and lovely things
Wend to the Pure.
Sigh not: unto the fold
Their way was sure.

Scan is from Art of Atari® by Tim Lapetino

(1) A couple of quotes from They Drew As They Pleased: The Hidden Art of Disney’s Musical Years (The 1940s – Part One) by Didier Ghez:

“While at Disney, she [Retta Scott] used to walk to work from time to time. Walt would sometimes see her and give her a ride the rest of the way to the Studio. Many years later she would confide that she saw Walt as a second father. That second father would chide her at times, like when her saw her feed the cats at the Burbank Studio. As a good Midwesterner, Walt feared that the well-fed felines would become less-effective as rodent deterrents.”

“In the late 1950s, David [Hall] established an indirect connection with Disney when he was hired by the former first vice president of Disneyland, C.V. Wood, to help design Freedomland, a theme park that opened in New York the following year.”

I’m coming back to the subject of C.V. Wood in another post. I’m also just reading about the extraordinary connection between Retta Scott and Nolan Bushnell.

(1) Rick Guidice – He was featured in Art of Atari by Tim Lapetino. His work for NASA could have been used in Spaceship Earth and/or Horizons.

(1) Museum piece: a show at the Cooper Hewitt explores design and technology (Wallpaper*)

See what I did there with the 1 and 1a (Come on horse racing fans!)?