A quick list of my top five. Here’s a link to a previous post with the different cities visited during my two-years in the UK.

(1) The Midland in Morecambe – Art deco hotel with a link to the railway (and the golden age of rail). The restaurant is top notch. It makes me pine for a revitalization of domestic travel.

(2) The Telegraph Hotel in Coventry – Themed hotel in a space once occupied by the local rag. In terms of theming, it’s only rival is the TWA Hotel. They have done a brilliant job preserving the interior features as well and objects that once served the newspaper are marked with QR codes (clever).

(3) Moxy Southampton – The place to either celebrate or commiserate a Saints win/loss. Southampton is my second home (and maybe where I’ll retire).

(4) Cambridge Central Station – Incredible views of the station, platforms, and railyards. The lobby displays all the rail departures / arrivals so there’s always the frenetic energy of travelers going to and from.

(5) Hilton Garden Inn Stoke on Trent – Modern and well-lit and close to the canals.

Other notable hotels include The Yarrow Hotel, Hampton by Hilton York, and the DoubleTree by Hilton Bath.

“Longer and darker the day, shorter and colder the night. Still and stifling the air: but a wind is stored up in the East. The starved crow sits in the field, attentive; and in the wood the owl rehearses the hollow note of death.”

“What day is the day that we know that we hope for or fear for? Every day is the day we should fear from or hope from. One moment weighs like another. Only in retrospection, selection. We say, that was the day. The critical moment that is always now, and here. Even now, in sordid particulars the eternal design may appear.”

(2) My Flickr album of the Midland Hotel in Morecambe. It was built in the 30s and reminds me of the Bird Terminal / TWA Hotel at JFK. I’m still working on a post about the architect and artists involved in its construction.

(2a) These are beautiful photos of the hotel from Flickr member robmcrorie.

(2b) A quote from The Midland Hotel: Morecambe’s White Hope by Barry Guise and Pam Brook:

“As well as allowing him [Oliver Hill] to design a substantial building in the new style he had embraced with enthusiasm, the Midland Hotel gave Hill the opportunity to put into practice his vision of unity in architecture and decoration. It was his belief that a building’s external appearance should be intimately linked to its internal décor, furniture, and upholstery – a philosophy he likened to ‘the French ensemblier system of architect, sculptor, decorative painter and other craftsmen…collaborating to one end and ideal’. It was this holistic concept that Hill brought to the Midland Hotel, one that would see him take complete control of all aspects of the project, from the building’s exterior design to its colour scheme, works of art, decoration, and furnishings – even down to the waitresses’ outfits, the colour of the hand towels and the shape of the door handles!”

(2c) A quote on Oliver Hill by Ken Powell:

“Alongside the revolutionary dynamics of the Thirties, an older tradition of craftsmanship persisted. Oliver Hill was, almost uniquely, able to bridge the divide between modernism and tradition. His work, hedonistic and even self-indulgent, may lack the purity and progressive zeal – and the breadth of imagination – of a Lubetkin or a Mendelssohn, yet Hill was a key populariser of modern architecture, selling it to clients who were not interested in social revolution.”

(5) National Rail Advertisement: Let’s get back on track (You Tube)

(1) I’ve clipped the blog post title from a chapter in the excellently written British Rail Architecture 1948-97 by David Lawrence.

“For centuries architects have used miniature versions of their designs to communicate their ideas to emperors, oligarchs, magnates, civil servants and audiences who must be engaged to ensure a project is approved for development. They may be the device which convinces a client to provide substantial investment for a project.”

“Many modelers will choose a station as one of their first buildings because it is a simulacrum of the interface between trains and human activity. It is an archetype for all stations. In this way the model — in fact an assembly of sundry materials and adhesives — is an imaginative threshold into the tiny world of the model railway, inviting the modeler and audience to step, like Alice in Wonderland, into a perfect version of an imperfect world.”

I have the ‘Entrance Building’ (Model No. 104) which inspired this photo at Walt Disney World. What do you think happened to Continental Models at 1 Dupont Street in Plainview, NY?

(3) Artist rendering of the new concourse for Liverpool Street (1987) from British Rail Architecture 1948-97 by David Lawrence. I love the vintage engine. It reminds me of Playmobil 4052.

(1) This Is Why Your Holiday Travel Is Awful (Politico)

“Penn Station is the second most heavily trafficked transit hub in the world, trailing only Tokyo’s Shinjuku Station. The station serves more daily passengers than the region’s three huge airports (Kennedy, LaGuardia, and Newark) combined. More people pass through Penn each weekday than live in the city of Baltimore. Anyone who has passed through Penn Station over the past half-century—or who passed through it this Thanksgiving weekend—knows that the nation’s busiest transit center is a national embarrassment, a hole in the ground where the food is ratty and the waiting rooms are sparse.” 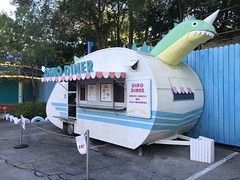 “To attempt to gain happiness, except in this way, is a labor lost; it is building on the sand; the foundation will soon give way, though the house looks fair for a time.” — Gain after Pain

“Decaying and dilapidated architecture resonates as loss, as evidence of the irreversible passage of time, yet architectural ruins emanate past grandeur. Ware’s comics, then, focus on ruins and the melancholy they elicit in an attempt to render the irreversible passage of time into an aesthetic object.” — On Modernism’s Ruins: The Architecture of “Building Stories” and Lost Buildings by Daniel Worden 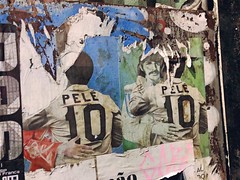 I was in São Paulo last week for work. It was a quick trip, with a packed agenda, so the opportunity for exploration was limited. I have a top ten list though…

“Ever since this station was completed in 1901, it has remained among the most important buildings in São Paulo and Brazil’s history. For decades its clocktower ruled over the city’s skyline to give its residents a reference point to set their clocks, and today the station houses the Museum of the Portuguese Language, a huge repository of and tribute to Portuguese art, language, and literature from around the world.” (THRILLIST)

(10) Whether on the Av. Paulista or the Sao Paulo International Book Fair Mickey Mouse was ubiquitous.

See what I did there with the 1 and 1a (Come on horse racing fans!)?

(2) Quotes from The Man in the Castle by Philip K. Dick:

“They want to be the agents, not the victims, of history. They identify with God’s power and believe they are godlike. That is their basic madness. They are overcome by some archetype; their egos have expanded psychotically so that they cannot tell where they begin and the godhead leaves off. It is not hubris, not pride; it is inflation of the ego to its ultimate — confusion between him who worships and that which is worshipped. Man has not eaten God; God has eaten man.”

“‘All afternoon assorted officials examined the alternatives,’ Mr. Tagomi said, ‘This is the most authentic of dying old U.S. culture, a rare retained artifact carrying flavor of bygone halcyon day.’ Mr. Baynes opened the box. In it lay a Mickey Mouse wristwatch on a pad of black velvet.”

(3) On my desk…
(a) Trappist Beer Travels: Inside the Breweries of the Monasteries by Caroline Wallace, Sarah Wood, and Jessica Deahl
(b) The Thinking Fan’s Guide to Walt Disney World: Epcot by Aaron Wallace

*Scan and quote are from Beautiful Bermuda: The Standard Guide to Bermuda (1947)

(2) A quote from Walt Disney and the Quest for Community by Steve Mannheim:

“Although the EPCOT concept was never built, its prototype transportation systems continue to influence the way millions of people around the world think about mass transit of the future. Disney, Roger Broggie, Bob Gurr, and their associates brought the words ‘monorail’ and ‘PeopleMover’ into common usage. By the end of his life, Disney was an international cultural icon and in a unique position to lead his peers in American industry. He could ask people to think about what the automobile had done to their communities.”